So, it’s me and twelve million people I don’t know.  I play on an established roleplay server, and all my characters are at a low level, so my world is not crowded.  I don’t run into a lot of people.  The people I come across are either doing their own thing or they are nice to me.  I may not feel special by playing such a popular game, but this is a good world.  I enjoy playing a game that’s beyond trendy, part of popular culture.  It’s refreshing.

I’m now playing classes (professions) that come with “pets”, but they aren’t really pets – they are magical animal companions.  My hunters get an animal that adventures with me.  My warlocks (a sort of magician) get a demon that helps me defeat my enemies.   If I ever decide to group with people I’m going to keep playing a priest, a healer, since they tend to be in demand for groups.  I do like being sociable, sometimes, in a game, but formal grouping is different – it’s structured, and there can be pressure.  I regard these games as a meditative experience, so grouping may not be for me.

Once you get the hang of it, WoW is designed to keep you playing.  There’s always just one more thing you want to do before you log off. I get my quests from the quest givers, wander around the world, deliver packages or secret letters, buy supplies for a party, and kill monsters, angry wildlife, or enemies.   I get rewards in terms of money, advancement in the game, and stuff.  There’s always a reason given for me doing the things the quest givers ask me to do.  Sometimes I’m interested, and sometimes I don’t care.  It’s enough that the quest gives me a reason to be out in the world.

It’s the world that’s compelling – worlds of winter, magical woods, medieval looking towns, crazy mad hatter towns, tropical islands — and I’ve only seen a little of the world!  I travel long distances by paying for a ride on a fantastic flying animal.  At higher levels in the game I’ll be able to get my own mount.

You can have up to ten characters on one server, which means you can try different races and classes (professions).  Each race starts out in a different area in the world, which gives you a reason to play different races.

World of Warcraft has two factions, the Horde and the Alliance, two loosely coupled groups of races that are fighting for domination in the world.   This affects the overall story, and it can affect you if you engage in player versus player combat, which I don’t do.  If you are playing an Alliance race, and you meet someone from one of the Horde races, you can’t text chat with them because you supposedly don’t understand their language.    I realize that this is the way the game world is set up, but I think it’s silly.   People from different groups come together all the time. Why should I have to see another group as my enemy?  I’m not a purist. If I am playing a character, and I’m given a quest to kill some NPC (non player characters) from the other faction (there’s always a reason) of course I do it, so I can keep going in the game.  But for my personal story, this whole war thing is ridiculous.  Why can’t there be peace.

I was playing Alliance characters exclusively.  Originally the Alliance was thought of as “good”, but it’s more complicated than that.  I play Alliance characters because they tend to be the more attractive characters – I have Night Elf, Human, Draenei (alien humanoid looking creatures, with hooves), and Dwarf.   But then I started playing two Horde characters, Goblin and Blood Elf.

Goblins are the nutty trade obsessed technologists in the game.   They are wacky characters.   The story of my goblin character is funny, clever and enjoyable.   I was all set to become a “trade princess” (who wouldn’t want to be that?) but things didn’t work out.  Somehow, after I was told to blow up a building for the insurance money, I ended up on an island with a bunch of other not too happy goblins.  No one is very happy, but we are making do.

I’m also playing a blood elf, because the world of the blood elf is simply beautiful.  I play a blood elf even though I look like elf Barbie with a dark side.  There’s something about the blood elves that remind me of Malificent in Disney’s Sleeping Beauty; there’s some menace with all that beauty. The Blood Elves got into trouble by focusing on dark magic, but I don’t care.  In their beautiful world – there are brooms that sweep all by themselves!  Along with all that beauty, who wouldn’t want a world where the inanimate objects did housework!

Pictures of my characters taken via the Droid Amory app on my Motorola Droid smartphone, using data in the World of Warcraft Armory. 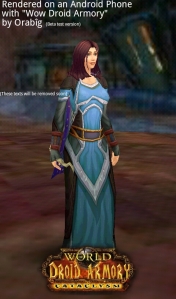 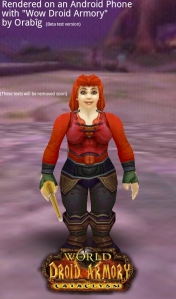 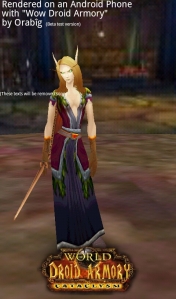 World of Warcraft Blood Elf Hunter. Looks like elf Barbie with a touch of Malificent from Disney's Sleeping Beauty. I love this character. March 2011.