Skip to primary content
In an online world people have concerts or parties in a virtual space.  Your character, your avatar, sits or stands in the space, walks around, dances.  People text chat, which is much less intrusive than talking during a concert!
On Saturday I went to a music show described as a virtual journey, in Second Life.   I’ve listed selections from a post on the Myst Online forum , describing the event – http://mystonline.com/forums/viewtopic.php?t=17608

The (travelling) Guild of Healers invites you on a metaphorical caravan………..

through desert and mountain, climbing and descending, to the Mediterranean Sea following the interwoven complexities of the Silk Road. We’ve chosen to meet in Second Life in new facilities provided by the kind folks there, but the music can be heard anywhere people want to meet.

We met in Second Life, an online world where the members design and create the places in the world.  We met in an Uru themed location. Uru is a multiplayer game that was cancelled but still has a fan following.   We sat around a fountain. There was a map of our route on the wall.

What followed could best be described as a virtual journey in a virtual space.  The creator of the event played music and talked to us as if we were on a journey – “the day is getting warmer”, “the camels are tired”.  The music had an evocative theme – think of a combination of a Hearts of Space radio show (http://www.hos.com) and the music of  Loreena McKennitt. The event creator text chatted, moving us along the route.  The participants also text chatted.  Sometimes the participants text chatted as if they were on the journey.  Sometimes they texted as if they were sitting around the fountain.  Sometimes they texted as if they were in front of their computer.  People welcomed other people, asked about something, made a comment on the journey, said they had to leave to do something in the real world, made a joke, talked about technical problems in Second Life (“sorry, I crashed”).  This is my favorite way to act in a virtual space, a way that seems most natural.  You act as if you are in a virtual space, but you also act as if you aren’t.

This type of event is very difficult to do well.  Aside from it being a pretend journey in a pretend space, the event was designed to be serious, which is hard to do well. It could have been a pretentious disaster.  It could have been boring.  It wasn’t either – it was spectacular!  In some way it felt like you were both sitting around a fountain and on a magical journey in a caravan on the Silk Route.

Here are some pictures. 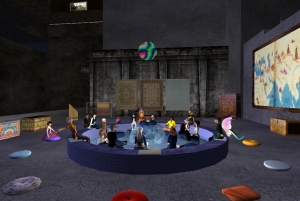 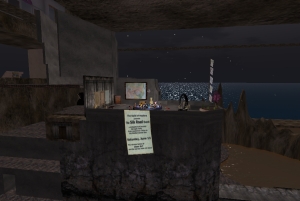 1 thought on “Second Life, The Silk Road, a Virtual Journey”