I take walks in the small Pennsylvania town where I’m currently living. I’ve noticed that this town has something I had not seen in years, little figures, lawn ornaments, nestled on people’s property, on their lawns, in their gardens, on a step. The figures are positioned so they can be seen from the street. The intent, I believe, is to be charming, sometimes cute. You do get the cuteness, but you also get effects that are sometimes strange.

These are my favorite pieces. I describe the piece and then show you the picture.

This is an assertively perky figure, all bushy tail, alert posture, slightly startled pose. It’s also very worn and needs paint. The combination make the figure somewhat unsettling, as if the creature was trying to keep up that perkiness, no matter what the cost. I thought it was more interesting to see the figure from a distance, so I didn’t zoom in.

This little bunny is worn, but still cute, in a genuinely nice way. I think it works well in the space. 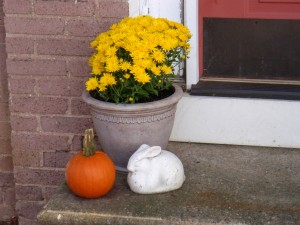 
I thought that I would see more figures in birdbaths and water fountains, but this is the only birdbath sculpture I found on my walks. This work is on the sweet side, and appears to be influenced by Disney, though it’s nicely done. The fairy is easier to see if you click to get the big picture.

The frog is chipped and needs some paint, giving it a “don’t mess with me, I’ve been around” look. This is a scary frog. 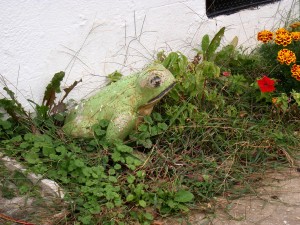 Although this picture is flawed, I wanted to include it. I think the frog, though hard to see in this photo, works very well in the space. The frog is a little scary looking, but not as scary looking as the other frog.

Frog under a Tree, Pennsylvania, October 2009

There’s a lot going on here. We’ve got a kitty, a little house, a flag, a bent tree, and two people (elves?) clasping each other. While somewhat odd, even for the Land of the Cute, it has its own charm. 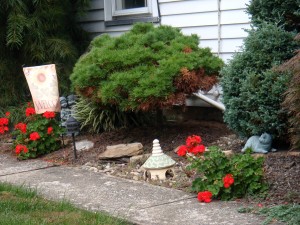 Kitty, surrounded by many things, October 2009

This is an advertisement for a garage. It’s a wonderful piece, perhaps crafted by the owner, funny and engaging. It’s more a work of folk art than a lawn ornament.

Lest you think there is no such thing as an animal sculpture in an outdoor space that isn’t “cute”, look at this wonderful frog sculpture in Rittenhouse Square, Center City, Philadelphia. There’s something interesting and wonderful about the size, shape and look of that frog. This frog is not a resident in the Land of the Cute.