The  summer heat and humidity in eastern Pennsylvania make it wonderful for summer swimming.   Here are many pictures of my hometown pool.  The best moments when I was growing up were at this pool — and the best moments of my time here now.  My photos tend to have a “where are the people”  look to them.  You’ll have to think of the people as being just out of range of the camera shot. 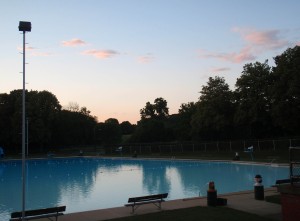 Sign above the entrance to the pool. The season pass is a great deal! 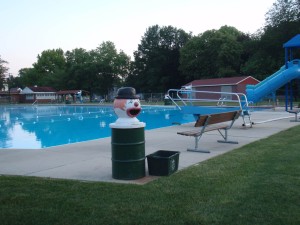 Just before opening day. That clown is a little scary.

Swimming on a sunny day.

Rope and post separating the deeper water from the shallow water. Interesting reflections.

Sunset, June 2010. I wish there was night swimming. It's warm enough.

View of the slide and one of the diving boards, from the water. August 2010. 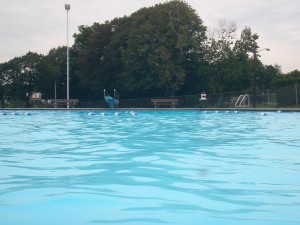 A cloudy day. Magical. I have the pool almost to myself. August 2010. 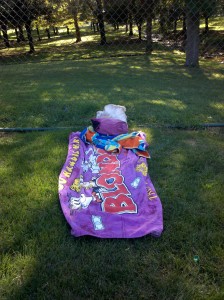 I like to put my towel at the edge of the fence, closest to the creek on the other side. In late afternoon there is shade.

Pool nachos, the best junk food snack on the planet. I don't want to know what's in that cheese!

September 2010. The pool is closed for the season.