This was a year of short trips. In June I accompanied a family member to an ALA (American Library Association) conference in Anaheim, California.  So, for the first time in my life, we went to Disneyland, very convenient as our hotel was across the street from the park.

It’s hard to get pictures without random strangers in the background, so I had to be creative.  Here is a view of the castle that is different from the one we usually see.

Disneyland Tomorrowland from the Monorail

You get good views from the Monorail.  The Monorail is fun, but it’s doesn’t have the same “wow” factor that I think it had in the 1950s.   Today, it reminds me of other forms of mass transit.

This section opened in 1993, but it’s based on old Disney, the original cartoons – very creative.  We loved it. 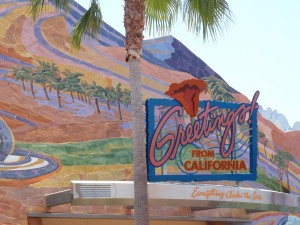 California Adventure is the Disney theme park that is across from the original Disneyland.

I liked the Hollywood part of California Adventure.  It seemed right that it was fake because, well, Hollywood is fake!

The front building is “real”, the back section is a picture on a flat surface.

Isn’t this bench clever?  I love the Mickey ears.