The ice plants have started blooming, here where I live, south of San Francisco, in the San Francisco Bay area.  Ice plants are succulents which form a ground cover.  The most common species in my area appears to be Carpobrotus edulis.  They are very hardy, hold water (good for this dry area) and they have beautiful pink and yellow flowers in the spring.  They were popular as ground covers for commercial spaces, and were planted along the highways to help prevent erosion.  They grow well in our climate.  Here’s a description and some pictures – http://en.wikipedia.org/wiki/Carpobrotus_edulis

I like them, though, yes, I know that they are an invasive species.  Ice plants are not native to this area.  They are native to South Africa, which has a Mediterranean climate like our climate, so of course they grow well here.  I realize that we need to get them out of natural habitats such as the Point Reyes National Seashore,  and the San Francisco estuary, but I do enjoy seeing them bloom in my area, in the spring.

The ice plants are pretty along Bayshore Drive.  I went there on Sunday, April 5, 2009, and took pictures.

The California Poppy (our state flower!) has also started blooming.  I’ll have to go take pictures.

In Guild Wars I’m still working up to playing with “real” people.  I want to combine it with my solo play.  I’m waiting because I’m still figuring out all the basics, such as everything the little mini compass map shows you.  An example is the red dots on the compass map – the red dots are the baddies.   When I couldn’t find the cave I was looking for, I amused myself by watching a red dot suddenly appear on the compass map, as an evil mutant monster insect/crustacean thing rose up out of the ground in front of me.  I feel bad killing the variations of gargoyles in Old Ascalon.  The gargoyles seem to have some sort of a culture (albeit a grunting one), but those monster insect things deserve to die.

It takes me forever to orient myself in a new part of the world.  My sense of direction is not great in “real life”, and it’s not great in the game.  I accepted a quest that sent me to Shalev’s cave (Old Ascalon area) – how hard could that be to find? I had it marked on a map I printed out.  3 hours later, I never found it, but me and my tough little priest henchwoman killed a bunch of monsters.  She’s my computer generated companion, but I’m getting quite fond of her.   The next day I discovered I was looking in the wrong place for Shalev.  I also learned what I didn’t know about the compass, the mission map and the general map!

I’m a member of a “Guild”.  More specifically, my characters in-game are in a guild.  My guild is in what is called an “Alliance” of 10 guilds.   The in-game purpose of guilds and alliances is for PvP – player versus player combat.  Combat can be between individuals or groups.   Guild Wars has several ways of doing this, all of which are said to be interesting and fun.  But – you don’t have to do it.  Some of our alliance guilds are into PvP, some are not, but it’s all OK.   We also use our guilds and alliance for friendly socialization, and for helping each other out in the PvE part (player versus environment) – where we defeat the evil beings in our world.   I was invited to join an established guild and alliance.  Each guild had made enough progress to get their members guild halls.  Guild halls consist of an interior and surrounding space, often an island.   These are shared spaces where only members of our guild and alliance can visit, unless we give someone an invitation.   The spaces are beautiful.  I love visiting them – so peaceful.

You can talk to people in Guild Wars via text chat to the people in your play area, your Guild, your Alliance.  I started to chat with people in the Alliance chat – nice friendly people.  It makes the world seem more like an actual world.  Even if you are doing something by yourself, there are other people in the world, some of whom you know.  It’s nice.

One of our Alliance Guild Halls

I walk through water.

Someone asked me what I did the other night, after class, and I said – I fought gargoyles, in Guild Wars!
I’m at the beginning of Guild Wars (online multiplayer game), the Prophesies compaign, the “presearing” world, before all the bad things happen.  The game designers make it easy for a new player, so that we can develop our skills.  When I traveled to the catacombs, all of the gargoyles did not attack me on sight.   A few of them noticed me – there was a big powerful one that was really mean!  For the other ones, I had to take the initiative.  I had to fight them –  I want the area cleared out and I need those gargoyle skulls.

I got most of them – there’s only a couple of gargoyles left.  I watched one of them for a long time, and then I let him live. I have all the gargoyle skulls I need, and he seemed kind of lonely.  How much fun can it be, hanging around the catacombs, never venturing out to the surrounding lands?  That’s not much of a life.

My Elementalist Fights a Gargoyle

Here I am, fighting a gargoyle. 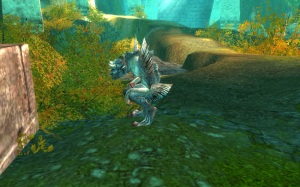 I let this gargoyle live.

The world is bucolic, above ground, but there are some weird things going on.  I had to defend myself against the largest seed you are ever going to see!  Yes, a seed, as in a plant seed, but it turned into a weird killer thing.  What’s with this lovely world – unnatural magic, a thinning of the ozone later, what?

Here I am, fighting a very mutant “seed”!

I really like my new armor.  Yes, that floaty skirt is “armor” — it protects me.  The outfit is still too skimpy for my tastes, but it’s a lot better than the short cheerleader skirt I got when I started out.  I like the top better too – I’m not spilling out of it, like I was with the other top.  I do need better boots and gloves.

More later! Glad to be here.