On Monday, July 28, 2014, as I was walking into work, two managers met me at the door. They hustled me into a conference room and told me that my friend in our group died over the weekend. Everyone knew we were work friends, and the managers didn’t want me to go into work and hear about his death from someone else. I could have gone home but I decided to wait out the day.

Work friends can be different. My work friend grew up here, like me. I left the area as soon as I could. Even at a young age, I knew I could not have the life I wanted, if I stayed, for many reasons which I will not go into here. I went away to college, and worked here summers. After graduation I lived in various places – Austin, Texas and California are the ones that count, the places in the world that feel like home. I moved back to Pennsylvania in 2009 for my elderly parents. I am still here. I live in the home I inherited from my parents, that I own with my sister.

My work friend grew up here, like me, and after a stint in the coast guard (so not me) he never left. He built his house not far from his parents. And by built, I mean built. He had the foundation done and the plumbing, but almost everything else he did himself, with his dad and (I believe) some friends. He was an avid boater. He built a new garage to hold his most recent boat, a garage with water, electricity and some insulation – so beautiful it looked like a little house. “In law unit”, we joked.  He had a million friends in the area. He knew his neighbors; they were friendly and they socialized, particularly in summer. I guess when you build your house on a little mountain, in an area with a lot of trees and lots of property maintenance, people get to know each other. He was married, no kids. He loved the outdoor work of maintaining his property, getting rid of dead trees, making it nice. I’m reasonably sure his politics were not my politics, but we never talked about it. He loved summer – on that we were in agreement. He loved tropical vacations by the ocean. He was younger than me, but not a kid, middle aged.

We started work here in the same group, almost two years ago. We went through all the reorganizations that happened here. We are on our third manger. My friend helped me get through hard times; he was there for me. Currently, he was going through some hard times himself and I was there for him. On work stuff, we agreed on some things and disagreed on others, but we always worked it out. In our latest work set up, he was in a workspace next to me. I said hello to him every morning and goodbye every evening. He was an early birder – I drag myself in as late as you can reasonably come in around here – 8 amish.

He brought in treats – he loved sweets. I brought us cashews.

He was the nicest man I ever met. He was good at dealing with people, colleagues, internal customers, vendors. Everyone liked him.

I will try to remember to hook up the trickle charger he gave me. Because, in case you do not know (he told me), I will get more for my dad’s car if I can start it. My dad’s car has been sitting in my garage for over a year, and odds are good it will not start. My friend wanted me to get a good price for my dad’s car. After I get the car started, I am supposed to put a little new gas in it – old gas gets thick and sluggish? I do not know.

Brian, I will miss you. 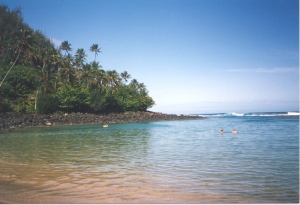 Kauai Beach, not sure of the name. Taken late 1999s. Posted in honor of Brian, who loved tropical vacations by the ocean.