As big cities go, Philadelphia is quite nice, even nicer now that I go in on the train via the adorable Colmar station.  This is where I’ve been, this year.

This is a farmer’s market in a permanent indoor space, in a lovely historic building next to the convention center.  The food is good.   The shops are good.  There is a local winery store, Blue Mountain Vineyards and Cellars, a local winery with excellent wines,   http://bluemountainwine.com/.  I almost wept when I stopped there.  Given Pennsylvania’s ridiculous liquor control laws (don’t get me started) and the local culture, I’ve mostly given up on the wine thing here.  Blue Mountain makes great wines, though it’s not easy to buy their wines, given that it’s a local winery and Pennsylvania’s liquor laws and the local liquor stores are so terrible.  I had the Chambourcin which was excellent, also interesting because I was not familiar with the grape. 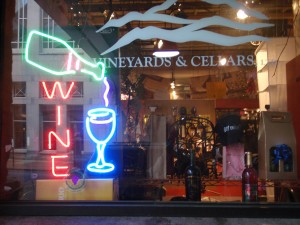 “Springtime in Paris” was the theme for 2011.  The flower show is huge; it takes over the Philadelphia Convention Center.  The show consisted of a number of gardens with a Paris theme and a market where you could buy things.  I had a good time, though I learned why it is never a good idea to go on the weekend.  It was very crowded

Another Paris and French themed event.  It was not crowded in the morning, but more crowded as the day went on.  The food was good, the performers were good, the sights were good, some interesting arty things. 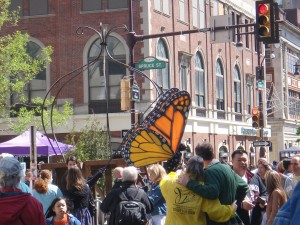 On the day I went to the street fair, I went inside the Kimmel Center, a performing arts space, a spectacular building with a hundred fifty foot barrel-vaulted glass roof (http://kimmelcenter.org/facilities/tour/).  There was a site installation, La Ville Radieuse, by Mimi Lien, an artist and set  designer.  http://pifa.org/journey/lavilleradieuse/2

The interior of the Kimmel Center was magical.  There was a replica of the Eiffel tower, all in lights.  Above me, moving on wires was a plane, trains, and a dirigible.  My photographs do not do it justice. 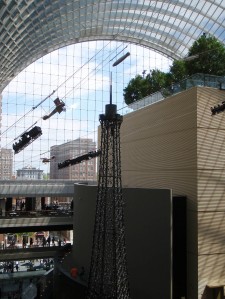 The Fabric Workshop and Museum – http://www.fabricworkshopandmuseum.org/

Contrary to the name, this is not a fabric workshop and museum; it is a contemporary arts gallery and museum, focusing on different types of materials.  I love it.  You can’t take photos inside, so I have no photos of their exhibits.   You can’t even walk around the exhibits yourself.  After you pay your admission fee, a nice person escorts you around the current exhibit, and you can stay as long as you like.  I think this is because the work is not protected and, while not fragile as in “you touch it, it breaks”, it would be easy to disturb the work.  I love the exhibits and hope to get there more often.

The Fabric Workshop and Museum, April 2011

Over the spring and early summer I went to Philadelphia for events – the Philadelphia flower show, a street fair, a dinner with women in technology.  Now, when I lived in California, I drove  to San Francisco many times.  I’ve driven all over the California coast.  I’ve driven to Seattle.  I drove 3000 miles across the US.  But, driving to Philadelphia does not appeal to me.  I will drive in Pennsylvania, Delaware and New Jersey, because I have to, but I don’t like it very much.  In the US I like to drive in coastal California, the Pacific northwest, the southwest, Austin Texas, and parts of Hawaii.  Maybe I’ll make an exception for coastal Maine and the highway to the Florida Keys – liked driving those roads.

That leaves train travel.  Train travel in the US is painfully slow.  Regional train travel is even slower.  But taking the train is fun.  It’s extra fun if you can start at one of the platonic ideals of train station cuteness, the Colmar station. Sadly, you cannot walk to this train station, unless you lived next door, perhaps, but there are still many benefits to traveling via this station.

Lots of parking and the parking lot doesn’t fill up.  Getting there is easy for me, if a bit long, a straightforward route, no tricky intersections, fairly good traffic.

Per Wikipedia (http://en.wikipedia.org/wiki/Colmar_(SEPTA_station)) the Colmar station was built in 1856.  I do not know if this is the original building.  Glass blocks such as these were originally developed in the 1900s.  Perhaps this station dates from the early 1900s.  It’s a tiny station and there is no restroom, but there is a restroom at the Wawa gas station across from the station, as well as food.  The Wawa gas station is open all the time. There’s a heater in the tiny train station building, for the winter, though I don’t know how much heat it provides.

Waiting for the train.

I feel like I’m in a movie, setting off from the country to the big city.  I look one way and the other, to see if a train is coming.

The train station and the train tracks. May 2011.

Looking the other way at the train tracks. April 2011.

The buildings across from the train tracks. Pretty. April 2011. 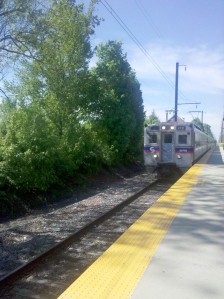 The train is not fancy, but it is comfortable.  Cell phone service is good, so I can use my Android smartphone. 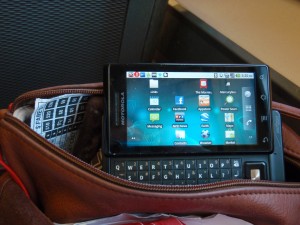 On the train with my Motorola Droid Android phone. April 2011.

Looking out the window

I used to take the SEPTA Norristown line into Philadelphia, which gave me a lovely view of the Schuylkill River.  There is no river on this route, but the landscape is pretty. 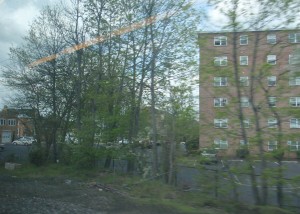 Watching the view on the way to Philadelphia. April 2011. 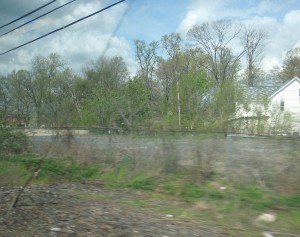 If I worked in downtown Philadelphia, Ambler would be a good place for me to live.

Farewell to the Colmar station.